Air traveling can be hard on humans. What is it like for animals? Not so easy. But at least they will have their own airport facility soon. The world’s first privately owned 24-hour animal terminal is coming to JFK airport in 2016 to address the unmet needs of pets, sporting, and agricultural animals. At least for animals whose owners have some money.

ARK Development, LLC, an affiliate of the real estate company Racebrook Capital, signed a 30-year lease with the Port Authority of New York and New Jersey to develop The ARK, a 48-million animal handling cargo terminal. It will be the first, U.S. Department of Agriculture-approved, 24-hour airport quarantine facility for the import and export of horses, pets, birds, and livestock, Racebrook Chairman John J. Cuticelli said in a public statement.

The terminal will be located at Cargo Building 78 at JFK, which has been vacant since 2004. The facility takes up approximately 178,000 square feet, plus 14.4 acres of surrounding area that include both airside access to the taxiway and plane ramp parking. The terminal will be divided into complimentary sections: the air cargo wing; a 24-hour veterinary hospital; a pet resort, managed by “Paradise 4 Paws;” a horse and livestock handling facility; a quarantine operation for import and export animals; and a kenneling service.

Gensler, an architectural firm founded in San Francisco, designed the ARK, with assistance from specialty architects in designing equine and livestock facilities—Lachlan Oldaker Equine Design and Temple Grandin Livestock Handling Systems. “A lot of our design making is in collaboration with veterinarians and consultants to help minimize the amount of stress placed on the animal,” said Cliff Bollmann, the lead architect for ARK at Gensler. “This is all being a huge learning experience for me.”

Bollmann gave several examples of design aimed at mitigating the stress level for animals, such as a clear-path travel space that is wide and comfortable for animals, walking surfaces that are not slippery, and easy access to water and food.

Another design challenge that Gensler faced was repurposing the out-of-dated cargo building for an animal terminal. “The building has been vacant and hasn’t been kept up to the level of repair,” Bollmann said. “The biggest challenge is to balance design with technology.”

Mark Deesing, a customer design consultant at Grandin Livestock Handling System, Inc, has been involved with helping architects understand psychology of horses and cattle at ARK since the beginning. According to Deesing, it is expensive to ship cattle and horses on an airplane. And thus these services are mostly restricted to breeding stock. The horses traveling by air tend to be racehorse and show horses, he said. Deesing is responsible for designing the horse and cattle handling facility, which includes holding pens and a quarantine service to control contagious disease. Deesing said quarantine facilities were designed to be “bio-secure,” meaning they are “like a hospital environment. They have airlocks on the door, bacteria filters, and sterile rooms.” The imported horses will also walk through a disinfectant hoof bath.

The challenge with the cattle is moving them. From the slope of the ramp they walk on to the  curved “squeeze chute,” which serves to limit the cattle that are coming into the facility and to help separate them into different stalls. 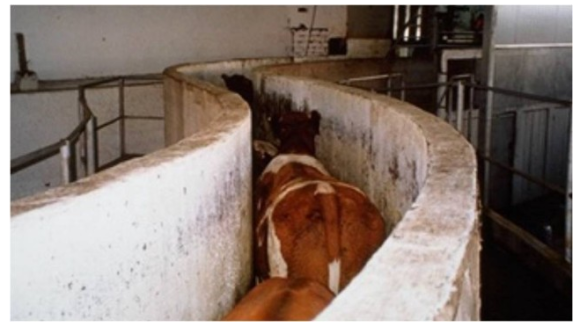 None of those requirements are needed for horses because they are well trained. Horse will arrive at ARK in trucks and staff will just walk them with a halter and a lead rope, into their designated holding pens. Deesing said a 12-by-12 stall is enough space for a horse.

Individual stalls for horses also serve additional purpose. Bollmann, the lead architect for the ARK project, said the horses have their own stall to prevent cross-contamination of air in the facility. And holding pens for the horses are also temperature controlled .

The cost for transporting horses and cattle at ARK hasn’t been set yet.

Paradise 4 Pawst currently operates in four locations—at Chicago’s two airports, in the Dallas/Fort Worth airport,t and  in the Denver airport. Saq Nadeem, CEO of Paradise 4 Paws, estimates that the company will be able to accommodate 200 pets per day at its 240-square-foot facility at JFK.

“Certain people like traveling with their pets, which can be extremely stressful,” Nadeem said. “In those scenarios, a lot of the pet parents opt to leave their pets behind at a pet resort like ours.”

Thanks to Paradise 4 Paws, pets won’t be confined in cages at JFK. Instead, they will stay at various levels of suites, ranging from the cheapest (“deluxe”) to the most expensive (“top dog”)—from $50 per day to $100 per day. Every suite above deluxe is equipped with a full-size bed; a flat-screen TV; and a 24-hour webcam, so owners can watch their dogs as long as they have an Internet connection. Owners can view their pets playing at general play area, too, from 8:30-6:00pm every day.

There are also large play areas—one for big dogs and and one for small ones. “A big dog like a six-pound Yorkie could be extremely gentle and friendly with a smaller dog, but could inadvertently hurt it,” Nadeem said.  The big-dog area is geared toward their need to running around. Small dogs enjoy more one-on-one attention. So benches are installed in the small-dog playground where a staff can sit with a dog. What’s more, each of the play areas has its appropriately sized bone-shaped splashing pool. “A big dog likes jumping in and out of water,” Nadeem said. “A lot of time, they don’t have that experience at home.”

There is also a spa salon where cats and dogs can get a haircut, a paws pedicure,  and various massage therapies. “A lot of time just the experience of leaving the house can be stressful for the pets as well,” Nadeem said. “So that’s why we have services like massage therapy. Given that we keep our playgroup size small and given a lot of one-on-one attention, a lot of the things we do is to make the pets stress manageable.”